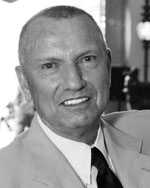 Craig grew-up in Fresno, California so quietly he hardly knew he was there! Ironically, he changed High Schools in his senior year, without his parents' knowledge, so as to keep from taking an interior design course! Afterwards, he began city life at the SF Art Institute, with burning plans for becoming a graphic designer, while working to eat at a Bank of America architectural department. He “accidentally” found work with interior designer Val Arnold when he applied for a job with a graphics firm … at an address the newspaper printed incorrectly, and a line of applicants to the street… take a giant step forward. While with Mr. Arnold, he obtained great exposure to the commercial world of interior design, and began studies at Rudolph Schaeffer School of Design.

Less than two years later and hungry for “refined design food”, Craig began working with Anthony Hail, one of San Francisco's two premier interior designers of the 70s and 80s. He found, as he puts it, “my religion”; recognizing no schoolroom could teach what he was understanding about refined interior design and life. He traded next for experience with W&J Sloane, a well known furniture and interior design store.  After two years, he returned to Hail's office for what he calls “finishing school” for the custom designed world of design.

For the next three years Craig worked on his own design projects, and then sold all of his possessions to move to New York City. With no prospects, little money and no portfolio; depending on the kindness of friends for a place to live, the quiet boy found himself a motivated “beehive of self industry”; making rounds and finding a benefactor in Albert Hadley, who finds him work with William Pahlman, a well known innovator in NYC- 20th century interior design. His “religion” turning to metaphysics, the young man found himself his own best champion.  "Albert introduced me to really caring for one's clients, making equal all those who help produce the many parts of a given project... and honesty for all,” Craig muses. Albert is still Craig's ideal, his hero for living life with awareness.

Craig tried the NYC modeling route, finding an agent and becoming “the favorite legs” of Gold Toe hosiery. However, with never a shot above the waist, he pushed himself back to California, where, from Fresno, and with a peaceful pace restored, he answered an ad (found in the Fresno paper) for a decorator in Modesto, California. Once again, Craig seems hurled forward with hardly an effort of his own. His world appears, even today, to just open to new horizons with an inexplicable harmony.

What he once lightly called religion, now three decades later, seems not to have been accidental; Craig smiles reeling off the multitude of projects and clients who have filled his life with purpose and satisfaction. Craig feels LeavittWeaver's most prolific years are still “strongly happening”; and with so many learning curves managed, abilities honed, and intentions put in order, "We are ready for those ultimate requests for the original and carefully evolved," says a thoughtful Craig.